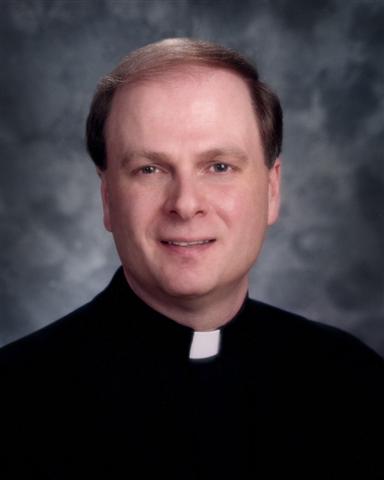 This profile of Father Dan was published during the St. Mary’s College 2005 reunion.

Father Dan was very involved during his high school years as he evolved to become a true “St. Mary’s Man”.   This carried on throughout his short life as he had achieved many accomplishments.

Please pray for Father Dan and his family.

It is a daunting task try to put the 50 year history of St. Mary's College into some proper context. As graduates we each only share a brief snapshot of the school and even that is colored by the passage of time and the tint of hormonal imbalanced memories.

We are a disparate group - thrown from our ancestral home on the hill to another building that has no emotional currency for the majority of our graduates. Yet for others, the Lakeway facility is the only St. Mary's College that we know.

The late Fr. Ed O'Reilly said it best when he explained, "Education is an organic experience. So it is. It is a set of shared experiences taken in different contexts and different historical settings".

What makes it unique is something that Fr. Dan Zorzi calls the "Charism of all the Basilian schools".

It is fitting then that we look to Father Dan to help us to bridge these fifty years. As much as any of us, he has lived through the past and is helping to shape the future of our founding Order in a larger multi-cultural world. It just happens that he has been through our shared experience about half way through our fifty years of teaching "Goodness, Discipline and Knowledge".

In 2005, Fr. Dan Zorzi was the President of St. Michael's College School in Toronto. He is the former Student Council President at SMC.   He is a Basilian priest and a Canon Lawyer.

Young Danny Zorzi wanted to be a doctor when he was growing up and when he graduated from SMC he went to McMaster University to follow that dream. As a boy growing up in a "good Catholic family" in the Soo he recalls some of the teachers who helped shape him - Doug McCabe, Hans Biemann and Sister Driscilla at St. Veronica's School. Fathers Brian Higgins, Marv LaBute and Mr. Tim Scott at St. Mary's College.

He will tell you that discerning a vocation as priest is a funny thing. It does not happen as it did to St. Paul on the road to Damascus. No lightning. No falling off your ass onto the roadway. In Dan's case it was a decision to start going to Mass mid-week at Mac and sensing a call to do something other than "just be a doctor". In true, Dan Zorzi's style he skipped a few steps and went right to the late Bishop Pappin. It was Bishop Pappin who essentially told him that he'd better drop everything else and get into the seminary.

When the diocesan seminary at St. Peter's didn't resonate as he thought it would, the memories of the Basilians eventually led him to their novitiate and his first teaching experience at St. Charles in Sudbury. The old St. Charles on Pine Street where the football team practiced on a gravel parking lot and the staff room during the day became his living room at night.

"It was all I knew and I was surrounded by great men like Fathers Gerry Lalonde, Bob "Hobo" Holmes and Neil Hibbard. When my poor mom came to visit she couldn't believe what I'd gotten myself into. It seemed fine to me. We had a great community. We worked hard and laughed a lot." From such things a vocation continued to develop.

Today Father Dan is essentially the C.E.O. of one of the most storied and influential private schools in North America - the Basilian flagship - St. Michael's College School. The Alma Mater of hockey legends like Mahovolich, Kelly and Duff. Basketball players like Leo Rautins.

Today when he looks out his window he doesn't see a gravel practice field. This one has artificial turf and sits over a subway station. The kids are the same though. Like all of our Basilian schools they still learn about "Goodness, Discipline and Knowledge" and as happened recently, when one of their classmate's dies, they come to the funeral Mass scrubbed and pressed to support each other and their families. When Father Dan saw that he knew that not much had changed.

The "Basilian Way" - the Charism that is our shared experience - endures. And one of our own "St. Mary's Men" is leading them.

Aside from his duties at St. Mike's, Father Dan lectures on Canon Law and presides over marriage tribunals. During his last trip home he took time to be a caller at the SMC 'Porketta Knight' where seven members of his family suddenly had their bad luck change to good. One more miracle.

He will be an honored guest at our Reunion this year 2005.